Samsung is recalling the Galaxy Note 7 worldwide over battery problem 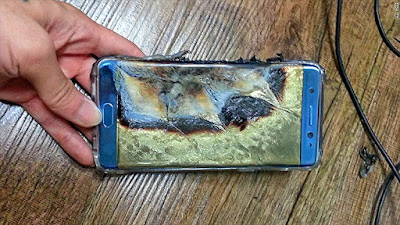 Samsung is recalling millions of new Galaxy Note 7 smartphones worldwide after reports that the devices can catch fire while charging.

The massive recall of one of Samsung's flagship devices is an embarrassing setback for the world's biggest selling smartphone maker. The Note 7 was unveiled just a month ago, and big rival Apple is expected to show off its new smartphone next week.

Samsung said Friday it had found a problem with the battery in some of the phones and was halting sales in 10 countries, including South Korea and the U.S. It will offer customers a new product for free in the coming weeks to replace the 2.5 million Galaxy Note 7s that have been sold.

The company originally said it would take about two weeks to prepare the recall, but later announced Note 7 users in the U.S. can exchange their device for a Galaxy S7 or Galaxy S7 Edge, starting next week. It will also refund the cost of Note 7-specific accessories.

Samsung is giving Note 7 users a $25 gift card or bill credit for the inconvenience.